This picture shows Valentino on the Yamaha YZR M1 800 'Excalibur' test bike in the winter of 2006/7.

If you hadn't noticed, as Valentino gets into the racing crouch under the bubble, the hilt of the sword on his helmet aligns with the blade on the fairing.

The picture is also available as on the test bike, with all the relevant sponsors picked out in yellow. Limited edition of 150.

Once it's gone, it's gone. This is the only stock available from the seller.
GPBox purchase protection - see terms Shop confidently knowing we've got your back for all eligible orders.
Message seller
Estimated arrival
Ships from United Kingdom
Cost to deliver Free
Shipping to

Thank you again. We love it

I just got back from holiday and your Spies print was waiting for me. Wow…what can I say? I’m truly blown away at the level of detail! Your work is absolutely stunning.

Have received the picture and am truly over the moon with. It has pride of place in my living room. Once again many thanks for an amazing picture and fantastic service

Hello Jackie, the picture arrived in time for my partner to open for his bitrthday. Thank you for all your help.

Hi Steve & Jackie,
the two canvases arrived today all safe and sound. They look bloomin good, I am stoked. Thanking you both very much and I will pass your details onto friends and to people I meet wherever I go!
Take care stay safe

Purchased item: Valentino Rossi Abarth, MotoGP Art
There are no more reviews for this shop

I have been a professional artist for some 20+ years now, specialising in Motorcycle Art and especially in the field of MotoGP. My interest in bikes filtered into my love of painting and hey presto here we are.

My interest in bikes started in the early sixties when my cousin and I were taken by my uncle to places like Mallory and Cadwell in the back of an old A30 van to watch the racing. When I was in my early teens, a friend and I used to cycle from Nottingham to Mallory Park in Leicester to watch the more important meetings like The Race of the Year. I remember my excitement when I saw the first of the Transatlantic Trophy races! Americans like Gary Nixon and Dave Aldana riding like I'd never seen before, with fullface helmets and coloured leathers! Wow! I suppose my hero then became Barry Sheene, one of the first to bring a touch of glamour and personality to the sport. All forms of motorsport interest me. Other than bikes, I still like to watch rallying, motorcross etc and I try to get to Santa Pod a few times a year to watch the drag racing (if you've never been, give yourself a treat). 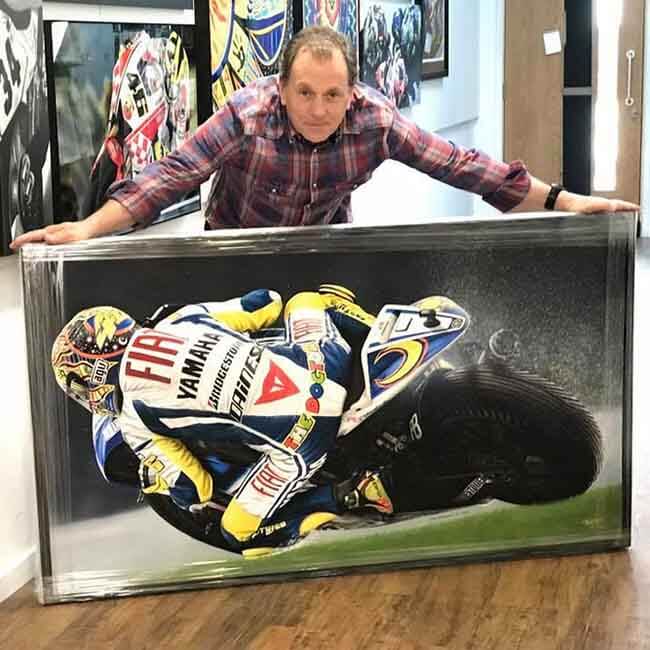 During the late eighties, like most big companies, BT was privatised and the inevitable redundancies started to happen. So in 1996 I decided it was time to take my redundancy package and try the art thing full time. The plan was to draw dogs and pets, and as I had plenty of contacts in that area, getting the work would be no problem. However, as a bit of a change, I decided to draw a few motorbikes. Because my friends and relatives thought they were so good, I asked the manager at Clay Cross Powersports, which was about 15 miles up the road from me, if they'd like to put them up on display in their new bike showroom. A few weeks later, John Winthrope from Crossbow Calendars was there at an open day, he saw my work, asked if I'd like to work with him and that was it really. John became my publisher and retailer from 1997 right up until the spring of 2008

Since then the publishing has been undertaken by myself and Kap at KNK Gallery, Nottingham. The selling is now controlled by Jackie from the website. You will occasionally see the pictures being sold at various bike shows and race meetings and from other outlets and websites.

Items will be shipped within 7-14 days and will dispatched in a strong cardboard tube.

Rated 5 out of 5 stars from 12 reviews (12 Reviews)
Visit shop
Based in Ossett, United Kingdom
Selling on GPBox since July 2018
34 Products listed